The ability to fully master yourself is predicated upon the ability to cut through the narratives thrown off by your limbic brain in situations of stress to tap directly into your sensations and be at peace with them.

The ability to master the environment is predicated upon the ability to physically execute upon a series of actions which in the process yields a corresponding set of sensations and results.

The ability to master other sapiens and mammals is predicated upon the ability to bend them to your will, namely the disciplined application of the carrot and the stick. In Sapiens, it is necessary to utilize narratives to  manage their limbic brain.

Any property in nature brought to its extreme form counter-intuitively appears on the surface to be its exact opposite. High levels of Self-mastery on occasions gets perceived as Sociopathy by the casual observer.

If you want to scale beyond your own physical efforts, you will need to be able to convince others the importance of what you are doing. When you are successful at that you will be able to elicit their muscles to work for your own cause.

To be able to elicit their muscles, you will need to be able to tell a good story. If you read the book titled “Sapiens” by Yuval Harari, story telling is a technological innovation by the human species that has enabled large numbers of people to coordinate their efforts based around a single endeavor. It is one of the main causes for the human species’ predominance in our environment.

This innovation is enabled by our limbic brain which understands things based on narratives. Compelling narratives elicit an emotional response resulting in human motivation and corresponding action.

As a product manager working on the core product as opposed to growth, the primary focus is the narrative as opposed to the metrics.

The primary job of the executive is to “fight” for resources to further his agenda. The way he does so is by telling a compelling narrative to the company.

As opposed to a demagog, a good product manager tells a story, backs it up with data and delivers his promise. The demagog gets his resources by telling a story but never delivers anything of substance.

Learn to tell a story. That is a very important skill set acquire if you haven’t done so.

Inspired by conversations with Ved. 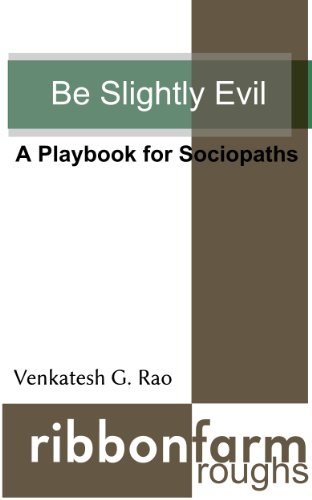 Dealing with the decision maker

Things to watch out for

Tactics to watch out for and utilize

Conversation Part 1: Focus on what happened